By: StockMarket.com
Should Investors Be Watching These Top Consumer Discretionary Stocks Now?

As investors navigate a somewhat volatile stock market with meme stocks leading in gains, consumer discretionary stocks could be overlooked. Now, as most investors would know, the economy is on the uptrend as we reach the tail-end of the pandemic. At the same time, businesses that suffered during the onslaught of the pandemic would be in the reopening trade as well. Not to mention, there is also the factor of consumers being eager to spend their discretionary funds during the summer. Given all of this, we could be looking at a perfect storm for the industry now. In fact, even the current economic data estimates appear to be in line with this.

Notably, the consumer price index (CPI) readings for May are due on Thursday later this week. Economists currently estimate that the CPI could rise by 4.7% year-over-year, indicating record figures last seen in 2008. What would all this mean for investors? Simply put, some would argue that consumers are spending heavily as more pre-pandemic services return. Moreover, consumers also have more choices than ever to do so. Because of this, consumer discretionary stocks across the board would be in a position to gain momentum. From cannabis stocks like Grow Generation (NASDAQ: GRWG) or cruise line stocks such as Royal Caribbean (NYSE: RCL), entry points are plentiful. Having read all this, you might be keen on adding some consumer discretionary stocks to your list as well. In that case, here are five making headlines in the stock market today.

Starting us off today is Canadian-based cannabis giant, Tilray Inc. For some context, the company is a leading name in the global marijuana-lifestyle and consumer packaged goods market now. In terms of scale, Tilray operates in Canada, the U.S., Europe, Australia, and Latin America. Moreover, the company boasts a massive portfolio of over 20 cannabis-based brands spanning 20 countries. The likes of which include comprehensive cannabis offerings, hemp-based foods, and even alcoholic beverages. As it stands, TLRY stock closed Tuesday’s trading session at $20.22. Seeing as it is up by over 110% year-to-date, could TLRY stock have more room to grow this year?

Well, for one thing, Tilray does not appear to be slowing down anytime soon. Earlier today the company launched Symbios, its newest medical cannabis brand. According to Tilray, Symbios will serve to provide a wider array of “formats and unique cannabinoid ratios” at more affordable price points. This would include medical patients getting access to products such as dried flowers and oils among others. It appears that while the recreational cannabis market continues to expand, Tilray is not neglecting its medical portfolio as well. Would all this make TLRY stock a top buy for you now? 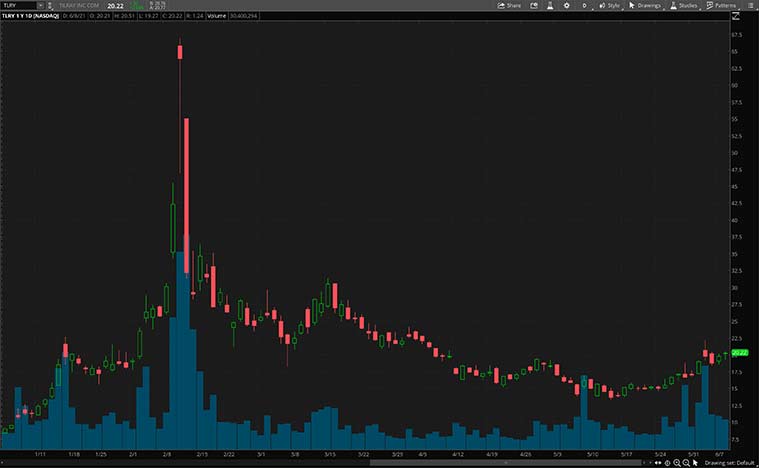 Following that, we will be taking a look at Apple. Now, this consumer tech goliath needs no introduction. After all, most investors and consumers alike would likely be familiar with its massive array of tech products. From its industry-leading iPhone product line to the increasingly popular MacBook line of personal computers, Apple has a lot to offer. Additionally, the company operates a tightly-knit ecosystem that provides consumers with integrated services throughout their Apple devices. Could now be the time for investors to buy in?

If anything, Wedbush analyst Dan Ives seems to believe so. To point out, Ives believes that Apple could achieve a $3 trillion market capitalization by the year 2022. His reasoning was, “If you look at the innovation, if you look at the supercycle playing out in the services business right now, I believe this is just sort of the next stage of growth.” Adding to that, investors would also be eyeing AAPL stock as the company just posted significant updates on its iOS system via its Worldwide Developers Conference. Will you be doing the same? 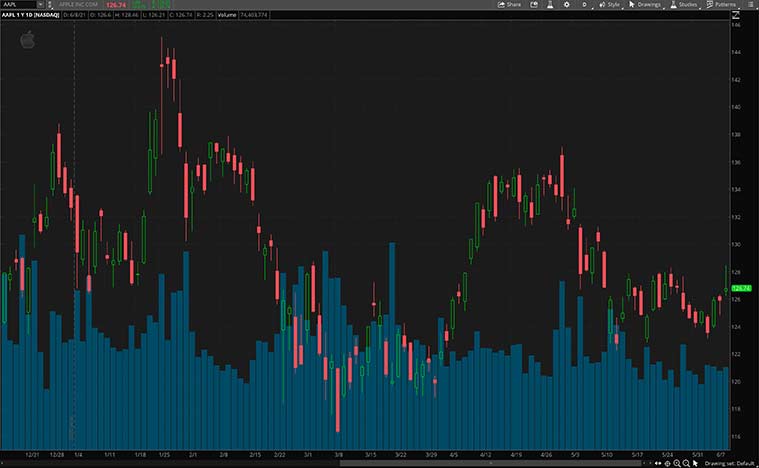 Alibaba is a consumer discretionary company that focuses on e-commerce and financial services. In essence, it allows businesses to transform the way they market, sell, and operate and improve their efficiencies. The company provides technology infrastructure and marketing to help merchants and brands reach their users and customers.

The company launched a cloud-based live streaming product that is designed for e-commerce on Tuesday. It also announced plans to expand the number of data centers across Asia. Alibaba also believes that its cloud computing segment is a key profit driver for the company in the long term and has been boosting its presence aggressively outside of China. For these reasons, will you consider adding BABA stock to your watchlist? 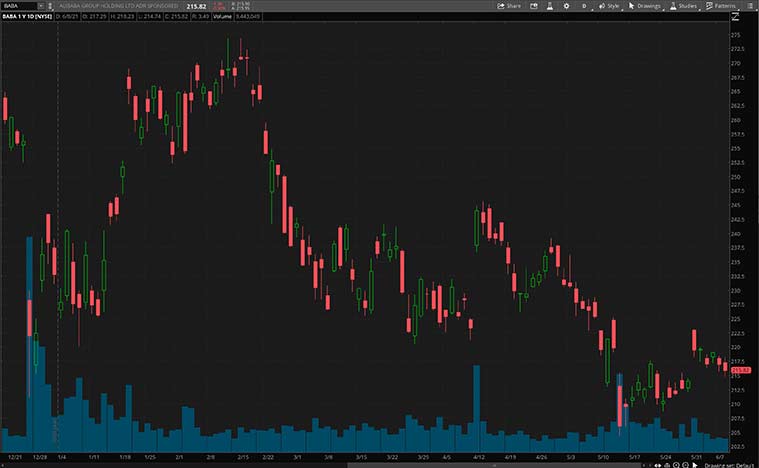 GameStop is a consumer electronics and gaming merchandise company that has been at the center of the meme stock craze as well this year. As retail traders continue to band and buy GME stock, they have helped push the stock to unprecedented highs. GME stock has been up by over 1,500% year-to-date. The company will be announcing its first-quarter financials for 2021 after the market closes tomorrow.

How has the company been doing financially? In late April, the company announced that it had completed its previously announced equity offering program. GameStop had managed to sell 3.5 million shares of its common stock and generated approximately $551 million. Net proceeds will be used to continue accelerating GameStop’s transformation as well as for general corporate purposes and further strengthening the company’s balance sheet. Given this exciting piece of news, will you consider watching GME stock? 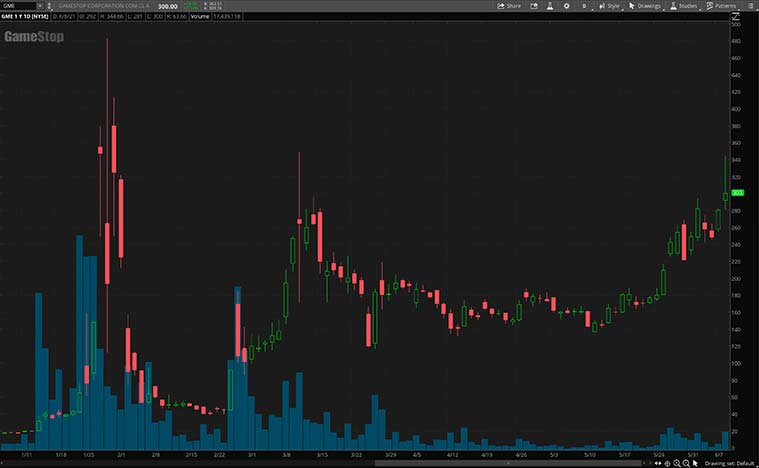 Carnival is a travel leisure company that is also one of the biggest cruise operators in the world. It boasts some of the best cruises in the world, which include AIDA Cruises and Princess Cruises. Princes is the world’s third-largest cruise line based on guest capacity and the company’s ships are renowned for their innovative design and wide array of choices in dining, entertainment, and amenities.

Yesterday, the company announced that its Carnival Cruise Line plans to return to guest operations from Port Galveston on July 3 with Carnival Vista, followed by the return of operations on Carnival Breeze on July 15. As part of the safety measures, these cruises will only be available for guests who have received their final dose of a CDC-approved coronavirus vaccine per current guidelines from the U.S. CDC. All things considered, will you watch CCL stock? 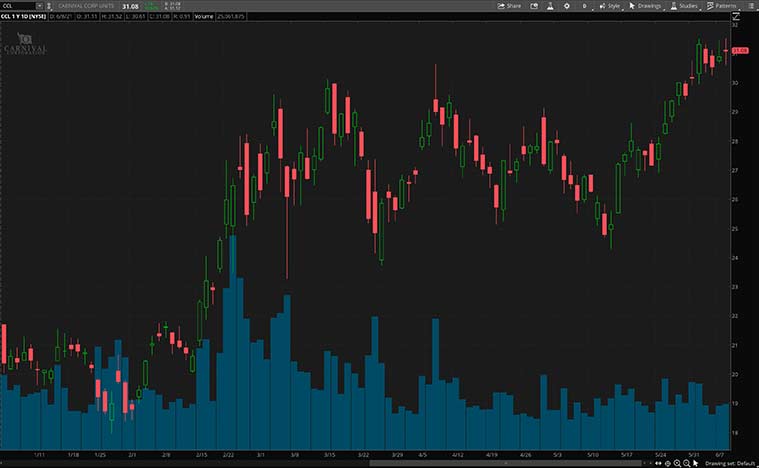