By: StockMarket.com
These Tech Stocks Are Trending In The Stock Market Today

Investing in tech stocks may have been the simple yet effective strategy to beat the stock market in the past. But can we say the same about the stock market today? Possibly. As we enter a new earnings season and tech indices are at all-time highs, investors are watching these reports closely to see if they are good enough to justify the rallies. To date, the market sentiment appears to be strong as bank stocks kicked off the season with a string of strong earnings last week. Coupled with the strong economic data and stimulus hopes, can we expect top tech stocks to rebound greatly when they report earnings this season?

In the past year, the NASDAQ-100 has risen by over 50% gains. That suggests that interest in tech stocks has been high among investors. On top of that, new innovations have continued to demonstrate the relevance of tech. Most industries today would not be able to sustain their growth without tech. Take retail, for example, imagine having shopping centers that only accept cash and no other payment method. Undoubtedly, this would affect business in the long run as many people are going cashless.

Some of the top gainers for the past year have been tech-driven companies. For instance, Zoom Video Communications Inc (NASDAQ: ZM) is one of the fastest-growing tech stocks out there. Revenue for the video-conferencing company came in 326% higher in 2020. Electric vehicle stocks like Tesla Inc (NASDAQ: TSLA) also posted impressive financial figures. Its revenue came in 28% higher for the fiscal year 2020 to reach $31.5 billion. This goes without saying, both company’s shares have seen significant gains over the past year. So, with the following big names in the tech industry reporting this week, do you have them on your watchlist?

First up, we have tech giant IBM. In essence, the company produces and sells hardware and software. It also provides hosting and consulting services in areas ranging from nanotechnology to mainframe computers. As some of you may be aware, the company announced its Q1 quarterly figures on Monday. IBM showed its biggest revenue gain in eleven quarters. The company’s share rose up to 4% in extended trading on Monday after it reported first-quarter earnings that came in better than analysts had expected. 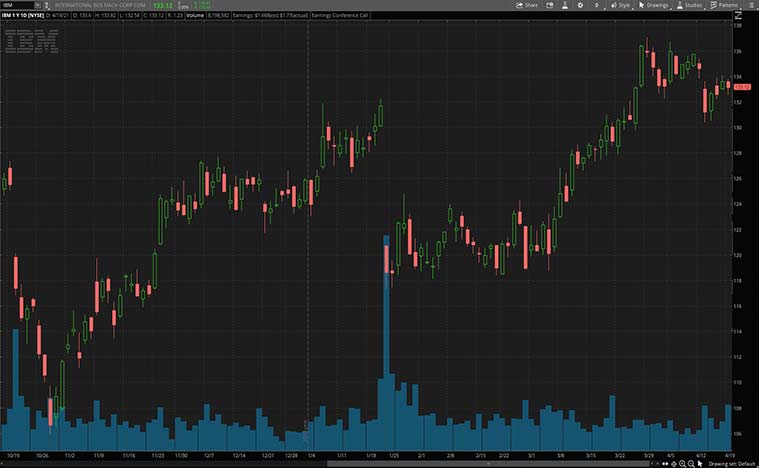 The strong performance this quarter is mostly driven by its cloud division. Also, there is increasing client adoption of its hybrid cloud platform and growth in software and consulting. Sales from its cloud computing services jumped 21% to $6.5 billion in the quarter.

On top of that, IBM also acquired two cloud consulting firms within the same quarter. In January, the company acquired 7summits to further enable its clients’ digital transformations through hybrid cloud and AI. Shortly after, IBM also acquired Taos, a leading cloud professional, and managed services provider. In a tech-driven world, the company appears to be heading in the right direction. With all that in mind, would you consider adding IBM stock to your portfolio?

Next on the list, Snap is well known among millennials for its popular camera app. Essentially, people can communicate through short videos and images via the camera application. By Snap’s latest estimates, the platform currently boasts over 265 million daily active users. Thanks to its growing user base, the company’s stock price has skyrocketed by over 550% for the past year. On top of that, Snap would also benefit greatly as the economy reopens. To put it simply, the more freedom people have, the more photo and video content would be circulated within its platform. 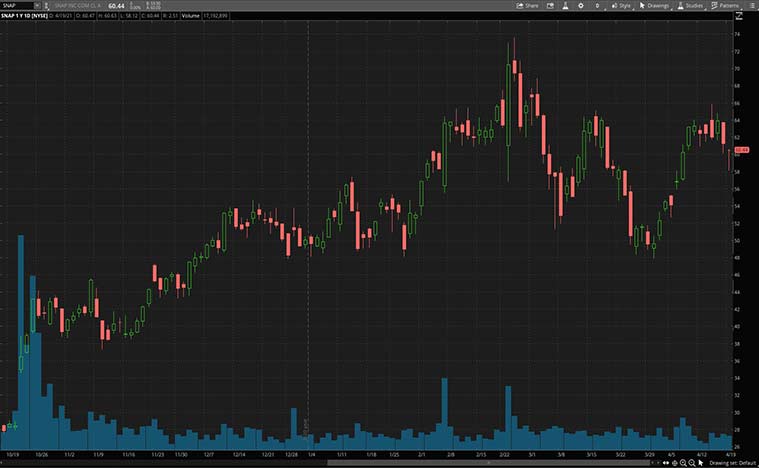 For those unfamiliar with its products, Snap is planning to launch an augmented reality (AR) version of its Spectacles smart glasses and a drone. The previous version requires a smartphone camera to enjoy the AR experience. Not only that, but the company has also been trying to expand its e-commerce capabilities. In March, the company announced its acquisition of Fit Analytics, the sizing tech company. Fit Analytics will work with Snap to help grow its social shopping platform and expand the tools available to its brand partners.

To top it all off, its growth potential in video games and AR could power SNAP stock to greater heights in the long run. Hence with the quarterly figures coming out this coming Thursday, analysts are optimistic about its next earnings. So with these exciting prospects ahead, would you consider investing in SNAP stock now?

Following that, we have one of the industry leaders in semiconductors, Intel. It aims to unleash the potential of data to transform business and societies by embedding intelligence in the cloud, network, edge, and every kind of computing device. With Intel scheduled to report its Q1 earnings on April 22, 2021, this will give investors an idea of how chip shortages are affecting the company. Due to the shortage of chips, the company’s share has been relatively flat in the stock market for the past year. On the bright side, the stock has been trending in the right direction this year. It has seen gains of over 20% since the start of the year. 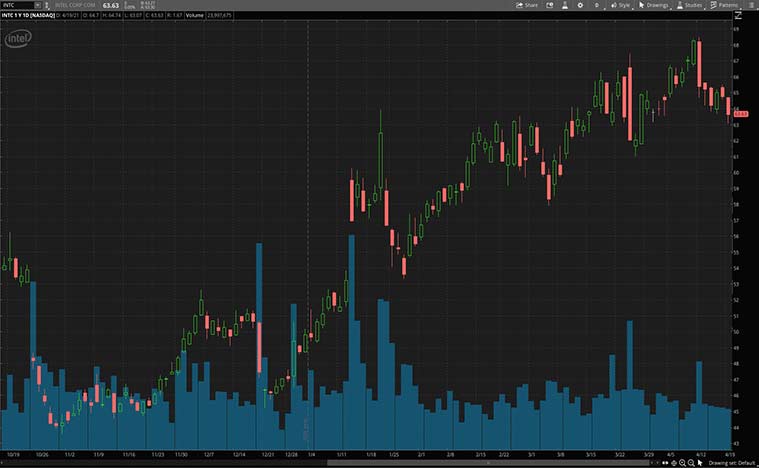 Last week, Intel announced that it is in talks to start producing chips for carmakers. This could come into fruition within six to nine months. Furthermore, the company also inked a deal with Udelv for autonomous delivery. Mobileye, the segment in Intel that provides autonomous solutions, will provide its self-driving system― branded Mobileye Drive™. It will “drive” the next generation Udelv autonomous vehicles called “Transporters”.

Mobileye technology will be ready for commercial use by 2023. This news would be the first large-scale deal for a self-driving system and signals Intel’s intent to expand into the autonomous driving industry. With such exciting news lurking, would you buy INTC stock at this moment?

Lastly, we have the pioneer in streaming video-on-demand, Netflix. It has paid streaming memberships in over 190 countries, It allows members to watch a variety of television series, documentaries, and feature films across a wide variety of genres and languages. The company told investors it expected an increase of 6 million new subscribers in the quarter, bringing its overall total to 209 million. The surge in new subscribers is due to the COVID-19 pandemic as many had to stay at home with little entertainment to turn to. 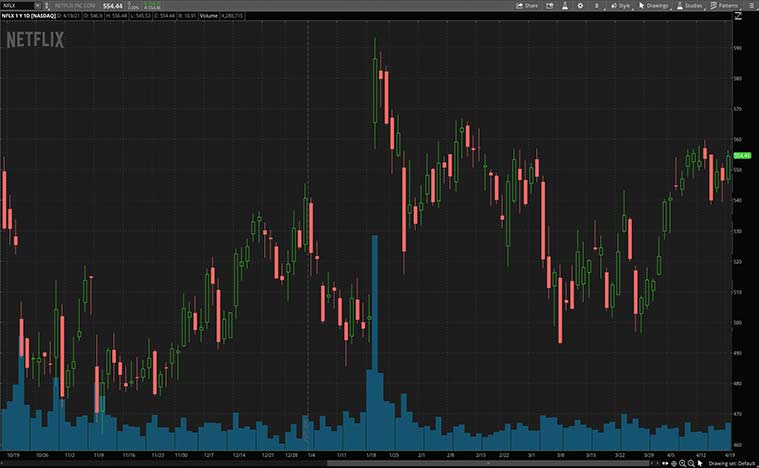 Financially, the company is as impressive as you would expect. Revenues increased by 24% to $25 billion for the fiscal year ended December 31, 2020. Also, net income before extraordinary items increased by 54% to $2.67 billion.

On top of that, Netflix announced last week that a multi-year deal with Sony (NYSE: SNE) Pictures Entertainment (SPE) will give Netflix the first exclusive window in the U.S. for SPE theatrical releases. With the Q1 financial results releasing later today, investors could be expecting respectable subscriber gains. So, would you invest in NFLX stock in anticipation of another strong quarterly result?