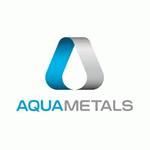 Management Commentary
“2016 was a pivotal year for the company, as we successfully built, commissioned and began producing products at the world’s first AquaRefinery and deepened our strategic relationships with major players throughout the industry,” said Dr. Stephen Clarke, Chairman and CEO of Aqua Metals. “Our partnerships, most recently with Johnson Controls -- the global leader in automotive battery manufacturing and responsible recycling -- and Interstate Batteries -- the largest independent battery distribution system in North America and the country’s leading battery recycler.  -- and Battery Systems Inc. -- one of the largest independent battery distributors in the U.S. effectively rounds out a sustainable ecosystem for the automotive lead acid battery industry and provides a level of supply and off-take to support our expansion of AquaRefinery 1 and the construction of additional facilities.

The webcast will be available for replay for 60 days http://public.viavid.com/index.php?id=122956 and on the investor relations section of the company's website at www.aquametals.com.

Safe Harbor
This press release contains forward-looking statements concerning Aqua Metals, Inc., the intended benefits of the Company’s agreements with Johnson Controls and Interstate Batteries, the lead-acid battery recycling industry, the future of lead-acid battery recycling via traditional smelters, the Company’s development of its commercial lead-acid battery recycling facilities and the quality, efficiency and profitability of the Company’s proposed lead-acid battery recycling operations. Those forward-looking statements involve known and unknown risks, uncertainties and other factors that could cause actual results to differ materially. Among those factors are: (1) the fact that the Company has only recently commenced lead-producing operations and completed its initial commercial recycling facility, thus subjecting the Company to all of the risks inherent in a pre-revenue start-up; (2) the uncertainties in any new commercial relationship and the risk the Company will not realize expected benefits from its relationships with Johnson Controls and Interstate Batteries; (3) risks related to Aqua Metals’ ability to raise sufficient capital, as and when needed, to develop and operate its additional recycling facilities; (4) changes in the federal, state and foreign laws regulating the recycling of lead-acid batteries; (5) the Company’s ability to protect its proprietary technology, trade secrets and know-how and (6) those other risks disclosed in the section “Risk Factors” included in the Quarterly Report on Form 10-Q filed with the SEC on November 7, 2016. Aqua Metals cautions readers not to place undue reliance on any forward-looking statements. The Company does not undertake, and specifically disclaims any obligation, to update or revise such statements to reflect new circumstances or unanticipated events as they occur.