Looking For The Best Electric Vehicle Stocks To Buy Before February? 3 Names To Watch

By: StockMarket.com
Traditional Automakers Are Getting Into The EV Space, Should You Follow?

Electric vehicle stocks have been some of the hottest investments on the stock market in 2020. Everyone saw Tesla (NASDAQ: TSLA) skyrocket to its all-time high. Meanwhile, pick-and-shovel plays like Blink Charging (NASDAQ: BLNK) are among the best growth stocks in the stock market. Therefore, all eyes are on this red-hot industry. As demand for EVs grows, a rush of EV players entering the space. And going public through special purpose acquisition companies (SPAC) has been a popular choice. As a result, this will continue to bring in new competitors, perhaps even a whole lot of profit potential to the market niche.

No matter how you slice it, EV is the future of the automotive industry. That said, traditional automakers like Ford (NYSE: F) or Toyota (NYSE: TM) aren’t going to sit idle and do nothing about it. The increasing participation from traditional automakers may be a validation for green energy transportation. While there are a lot of start-ups and everyone else invading the space, luxury automakers also have their sights on the red-hot industry. Rumor has it that Rolls Royce is also working on its EV prototype, where the full-electric Phantom prototype is currently being tested in Germany, by Roll’s parent company, BMW (OTCMKTS: BMWYY). The model will probably be called Silent Shadow- the name was trademarked by Rolls-Royce last year.

Gone were the days when Tesla was the only pure EV play when you want to invest in this space. In fact, today new players continue to enter the space. And many of them have the potential to be game-changers for investors hoping for triple-digit percentage gains over this decade. With all that in mind, would you consider adding these trending EV stocks to your watchlist today?

Best Electric Vehicle Stocks To Buy For This DecadeNio

First up, dubbed the ‘Tesla of China’, Nio has recently soared to its all-time high. That came after the company revealed its first-ever EV sedan model that could very much prove its competitiveness with its long-range battery. Nio’s latest EV mode, et7 claims a driving range of 1,000 kilometers. If the claim holds up, that would truly be revolutionary. That’s because XPeng’s P7 and Tesla’s Model S maximum ranges are only 706km and 652 km respectively. With Nio’s new milestone in battery range, it’s understandable why the company has been on EV stock enthusiasts’ radar.

When it comes to investing in the EV space, no doubt, Tesla is clearly the favorite. Many would agree because of its crazy rally in 2020. But Nio stock is a ten-bagger that put Tesla’s gains to shame. The Tesla of China started the year on a strong note by reporting monthly record deliveries of 7,007 units in December 2020, ending the year with a total delivery of 43,728 units. If you really believe that it could challenge Tesla’s dominance in the world’s largest EV market, would you believe that the et7 would benefit NIO stock as much as the Model S has benefitted Tesla? 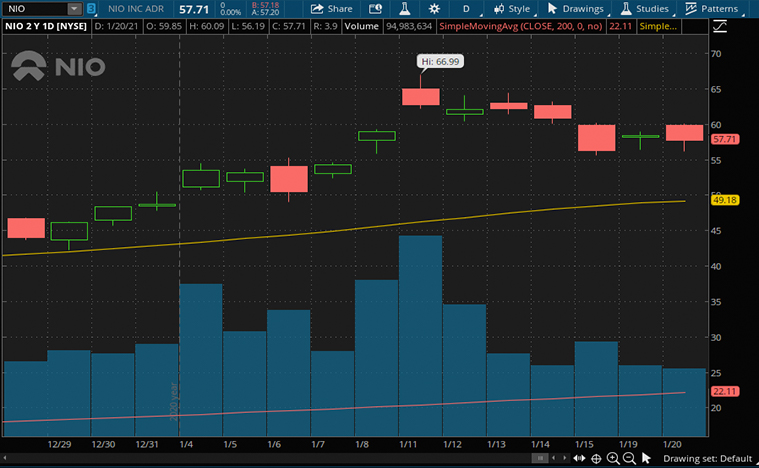 Despite the monstrous run-up and stretched valuations, there’s a great chance NIO stock could continue its remarkable performance in the week ahead. With so many resources under its belt, it has all the reasons to expand its lineup. Also, the company plans to introduce a new model each year going forward. This will no doubt boost Nio’s sales in the years to come as the demand for EVs increases. With the company’s long growth runway going forward, will you consider having NIO stock in your portfolio?

If you are looking for a traditional automaker transitioning to electric, General Motors may be your best bet. If you think transitioning to EV is the only thing GM is doing, you may be surprised with its intention in the autonomous vehicle technology space. Just recently, the company has partnered with Microsoft (NASDAQ: MSFT) in leading a $2 billion investment round in self-driving car startup Cruise LLC. This is a deal that could potentially bring the software giant’s cloud and edge computing capabilities to the venture. If you’re investing in high-flying EV stocks, you could potentially be buying into a classic stock market bubble. It might not end well. However, if you’re looking into buying GM stock, you are investing in an established auto stock with high exposure to EV.

Recall that in November, General Motors announced that it plans to invest $27 billion in EV and autonomous vehicles through 2025. The company also mentioned that it plans to release 30 EV models globally by 2025. In the near term, Morningstar analyst David Whiston says GM is poised to report some big fourth-quarter numbers in February. “We see the potential for good quarterly earnings, scheduled for Feb. 10, due to strong retail demand from GM’s pickups and full-size SUVs, which are the most profitable vehicles it sells,” Whiston says. 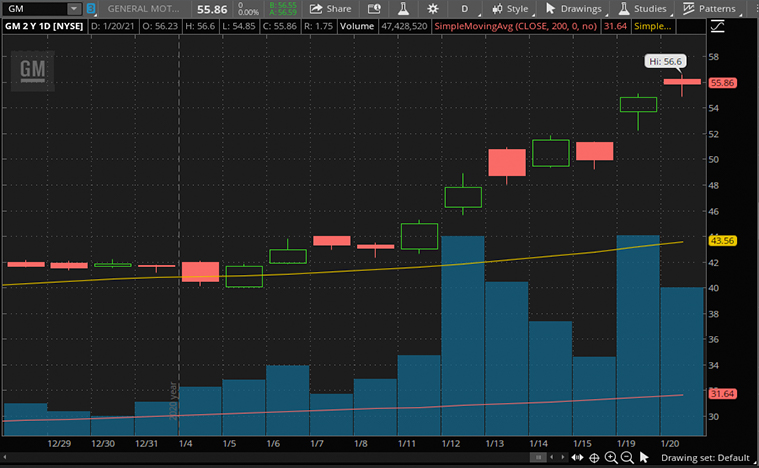 General Motors has an impressive lineup of EVs. The company’s Chevrolet Bolt and Chevrolet Volt are among the best-selling EVs in the US. Both of the models are much more affordable compared to Tesla’s models. Meanwhile, the truck is expected to go into production at the end of this year. GM’s diversified range of options would certainly be welcome news for customers. With the industry stalwart setting its sights on the future, will GM stock continue to run up after the recent rally?

[Read More] Looking For The Top Biotech Stocks To Watch Right Now? 1 Up 200%+ In One Day

Lithium Americas may not be exactly an EV stock. But it certainly has been one of the biggest beneficiaries of the rush back to lithium stocks. The company has scored big among top lithium stocks. With the company’s stock price plummeting nearly  20% on Wednesday’s session, it does provide a nice set-up for investors to buy on dips. It’s not all bad news though, really. The stock initially had a boost after an announcement stating that the key federal permitting milestone was completed for its Thacker Pass lithium mining project in Nevada. But the subsequent announcement of a $350 million new common stock offering sent the company’s shares sliding.

The company’s stock price has been on an upward trend since the market crash in March last year. Investors may not be comfortable in investing in battery stocks because of their volatility. Some may also have reservations about the risk of fluctuations in commodity prices which would affect earnings. But as long as lithium batteries remain in demand, I wouldn’t be losing any sleep. 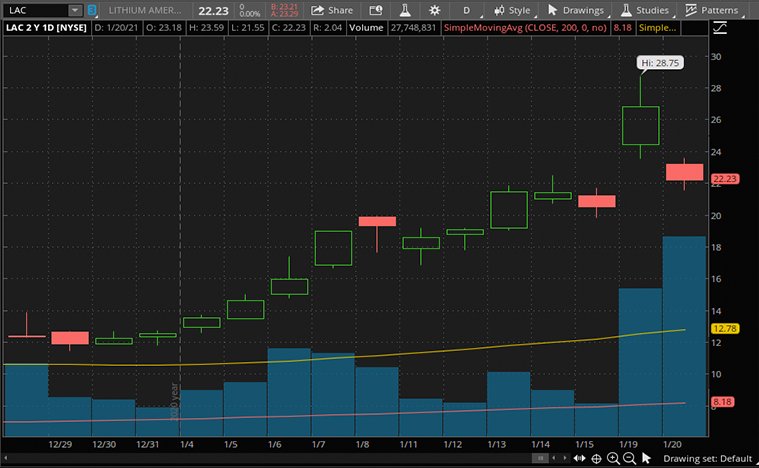 Yesterday’s financing news may not be totally positive news for traders or scalpers as it could affect their short-term gains. On the flip side, it should actually be considered good news for long-term investors who want the company to see the company succeed by investing in the potential of mining projects. But till then, as the company continues to establish itself, LAC stock remains a speculative bet in the stock market.