By: Penny Stocks to Buy, Picks, News and Information | PennyStocks.com - Feed
Are You Following Analysts On These Penny Stocks?

This year has gotten off to a strong start already. That goes for penny stocks & blue-chips alike. Many stocks are reaching new 52-week and all-time highs. Meanwhile, the broader markets have weathered the economic storm well. But when it comes down to “following the money,” there’s one part of the market that is red hot right now. Penny stocks and small-cap stocks, in general, have captivated traders, and for good reason. Just look at some of the names we’ve discussed within the last 15 days. Many have actually gone on to leave the penny stock definition behind.

If you think I’m just talking about this because I want you to think small-caps are outperforming, let’s take a look at some figures. I’ll use the Russell 2000 Small Cap ETF (IWM) as the benchmark for small-cap stocks. Larger-cap, let’s use the S&P ETF (SPY). Since the beginning of 2021, the IWM has jumped as much as 8.8% to new record highs.

While the S&P has also reached new record levels, its2021 climb has only been about 1.6%. Furthermore, we can see today that the large-cap markets have pulled back for a second day in a row. As for small-caps, the IWM did drop earlier in Friday’s session. However, as of mid-day, the ETF reclaimed most of that morning sell-off. What’s this mean for traders? Well, I’ll let you come to your own conclusion but momentum remains in small-caps heading into the long weekend. With this in mind, here are a few penny stocks analysts have high hopes for. Will they be on your post-holiday list next week?

Exela Technologies Inc. is one of the penny stocks we’ve discussed since May of last year, believe it or not. At the time, shares were trading around 30 cents and the company just tweeted an update to one of its previous deals. Fast-forward to now and XELA reached highs of $1.15 this week.

Since our article in December, XELA stock has rallied big. So what exactly does Exela Technologies do and what has transpired over the last few weeks? The company is a business process solution company with operations in several unique markets. This includes healthcare, legal, and ITPS services. It’s work includes the optimization of a wide range of digital platforms that are used by over 4,000 customers across 50 countries. As an end-to-end partner, Exela Technologies provides software and automation services that can be customized to a variety of business models. And with tech in focus right now, Exela Technologies is seeing heightened popularity.

However, as we explained earlier this week, the focus of traders has been more on what the future holds than its prior achievements. Exela even retained UBS Investment Bank to explore strategic alternatives to build shareholder value. Additionally, On December 17th, Exela announced that it had secured a loan for $145 million from Angelo Gordon, a large investment firm and retired its existing debt under a previous facility, which brought in more liquidity for its strategic initiatives.

While there isn’t a price target right now, Cantor Fitzgerald has an Overweight rating on the penny stock. 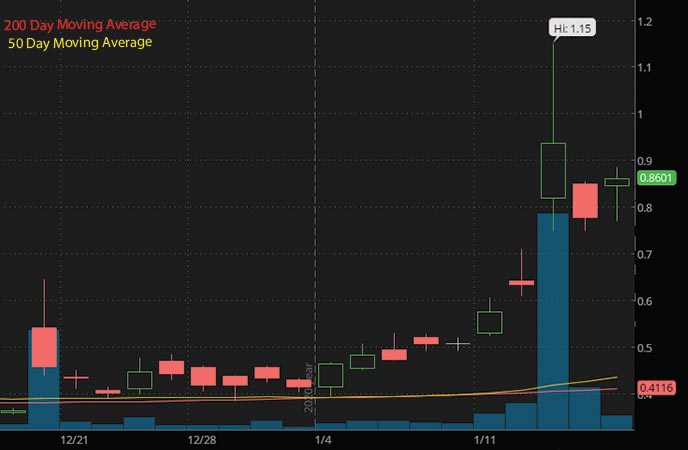 Another one of the penny stocks we’ve continuously covered for months is AcelRx. Since last March, ACRX stock is up, overall and just reached new 52-week highs. But this move hasn’t come without its share of volatility. After reaching April highs of $1.59, the penny stock whipsawed between lows of around $1 and highs of $2.13 during the rest of the year. This volatility was thanks, in part, to capital raising activities sending shares lower and key milestones doing the opposite.

One of its lead products is DSUVIA that treats moderate to severe acute pain. The treatment has been the center of attention after becoming the target of several deals last year. Where does AcelRx stand now? This week, the reported on its 2020 achievements. If you’re watching the company right now, some of these are important to take into account. In September, the U.S. Army awarded AcelRx a contract of up to $3.6 million over four years for the purchase of DSUVIA to support a DoD study to aid the development of clinical practice guidelines.

Also, last month, AcelRx announced the publication of clinical data in an article in the Journal of Universal Surgery. It reported that perioperative dosing of DSUVIA provided more rapid PACU recovery times compared to standard IV opioid administration. In light of just these few milestone events, it starts to firm up the reasoning behind Ladenburg Thalmann’s current rating. Based on the target, Ladenburg’s ACRX forecast sits 265% higher than current trading levels. The big question now is will ACRX managed to reach that price target? 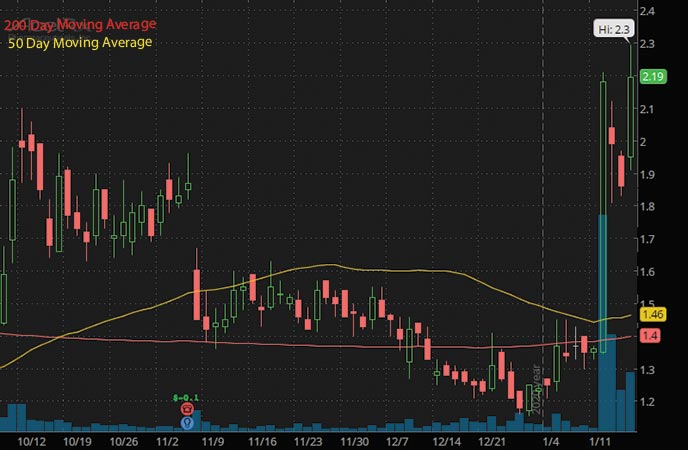 Traders will use different indicators to find penny stocks for their watch list. This we know, however there are other ways to identify potential opportunity and risk. One of these ways is looking at 52-week levels. If anything at all, the 52-week high and low can act as a “heads up” that there may be stocks that are overextended in one direction or another. This isn’t always the case but it is a way to find potentially oversold or overbought stocks on a longer-term timeframe.

In this case, BELLUS was one of the penny stocks we stumbled upon last summer. It was actually trading consistently around $12 then bad trial data sent shares plummeting. Since then, BLU stock has been trading as a penny stock. Again I won’t get into a history lesson on the company. But I will say that the last few months have been much more active for the penny stock. A lot of the momentum began after the company’s last quarterly report. In particular, BELLUS managed to see an increase in both EPS and sales, year over year. Quickly following this, the company announced dosing its first patient in a Phase 2b trial of its BLU-5937, the same treatment that was the cause for concern last summer. The trial focuses on patients with refractory chronic cough with topline results expected later this year.

Right now, analysts at Evercore ISI have a bullish outlook on the company. The firm issued an Outperform rating on the stock. It also has a $12 price target. That puts their BLU stock forecast 215% higher than current levels. 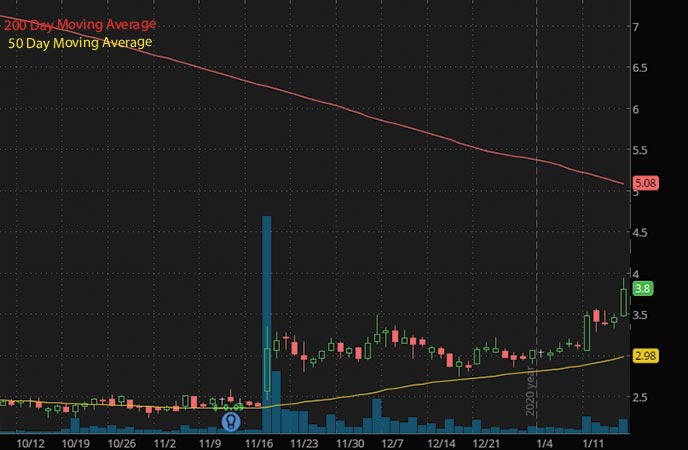 Synthetic has been on the move since the start of January. Shares skyrocketed from $0.39 to highs of $1.70 within a 48 hour span. While things have settled down a bit, the last few days have shown much stronger trading momentum and a less parabolic move in price.

The penny stock has been the center of attention amid recent updates and institutional interest. One of the points of interest for investors in the expectation of clinical trial enrollment in its Phase 1b/2a trial for SYN-004. The trial will focus on allogeneic hematopoietic cell transplant (HCT) recipients. The company said it expects the enrollment process to commence this quarter.

Custodian Ventures reported a 9.9% stake in the biotech company last week. Analysts have also weighed in on the stock. Right now, Alliance Global’s current price target of $1.25 puts its upside forecast roughly 47% higher than current market levels. The firm also has a Buy on the stock. 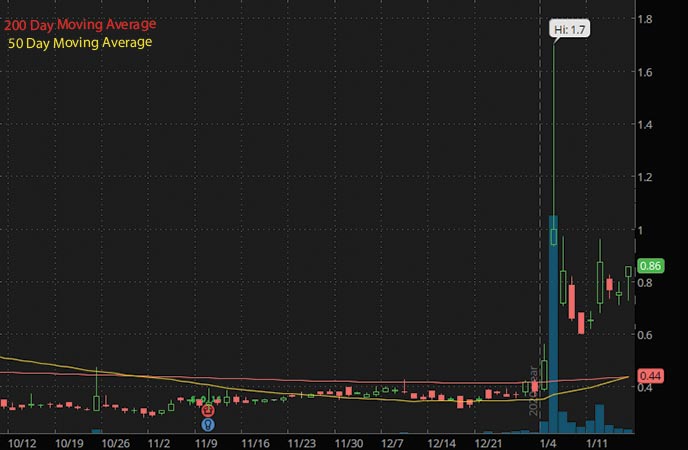 Should You Trust Analysts?

I think it goes without saying, but I’ll say it anyway. Analysts aren’t right 100% of the time. In fact, depending on when you’re looking at a stock and referencing the last analyst who covered it, a lot might’ve changed fundamentally. While ratings and targets are great to talk about, it’s not a substitution for full diligence on a company. So if you’re looking for penny stocks to buy, I wouldn’t rely solely on what analysts say. At the end of the day, they aren’t the ones pressing the buy button and they won’t be the ones to hit sell for you either.