Are These The Best Biotech Stocks To Watch Right Now? 3 To Consider As Pfizer’s Vaccine Rollout Begins

By: Stockmarket.com
Could These Be The Top Biotech Stocks To Watch Now?

The race for a coronavirus vaccine has benefitted most top biotech stocks so far. In turn, this has created an intense competition to vaccinate the world amongst a wide array of biotech companies. Moreover, the recent news of Pfizer (PFE Stock Report) receiving approval for a vaccine rollout in the U.K. could incentivize these companies to kick into high gear. In brief, the U.K. government has authorized the Pfizer vaccine for emergency use in the country. As expected, the elderly and medical workers will be the first to receive it. 40 million doses of the vaccine will be delivered starting next week going well into 2021. With all these developments, could there be room for other biotech stocks to watch make waves in the industry? The short answer is likely yes.

Is Now The Best Time To Buy Top Biotech Stocks?

Realistically, there are benefits to not being the first one through the gate. Later additions to the list of approved vaccine candidates could refine their approach based on the performance of Pfizer’s first vaccine rollout. Looking at the bigger picture, biotech companies continue to innovate regardless. For example, Vaxart (VXRT Stock Report) is reportedly working on a coronavirus vaccine that could be administered orally. This could possibly perform better than existing leaders in the race with lower logistical complexities.

However, as intense as things may get, seasoned investors are aware of numerous other non-coronavirus developments in the industry as well. Generally, a challenge for many would-be to discern which is worth watching. Undeniably, this is difficult amidst the bombardment of vaccine-related news. Therefore, it provides an interesting opportunity for sharp-eyed investors to get ahead of the curve. With all that in mind, here is a list of top biotech stocks to watch in the stock market today.

Starting us off is Moderna (MRNA Stock Report). The company has been in the limelight since its initial vaccine trial results were released last month. Evidently, its share prices have increased by over 100% since then. Things appear to be looking good for Moderna as it has yet to run into any serious side effects in its vaccine trials. In fact, two of its competitors AstraZeneca (AZN Stock Report) and Inovio Pharmaceuticals (INO Stock Report) faced setbacks recently.

Moderna’s share prices are up by over 25% last week. Understandably, the company has shifted its attention towards its coronavirus vaccine development efforts. It is no wonder that it had a stellar quarter as reflected in its most recent earnings call. The company reported a huge 826% rise in revenue year-over-year. Furthermore, it also ended the quarter with 766% more cash on hand compared to a year ago. Investors are likely wondering if it is a good time to invest in MRNA stocks at this time. Moving forward, could the company continue to flourish considering all the developments it has seen so far? 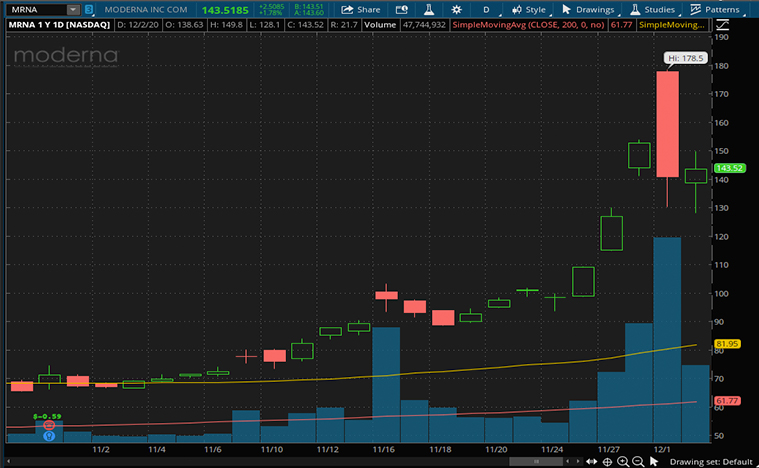 More recently, it was reported that zero test subjects developed severe coronavirus symptoms in Moderna’s recent trials. The company announced these results based on its 30,000-person efficacy trial using its vaccine candidate. Impressively, only 11 people developed mild symptoms after receiving the required two doses. Overall, the vaccine achieved an efficacy of 94.1%. In light of this, the company has proceeded with its applications for emergency use authorization in the U.S. and Europe. Coupled with its application to Singapore’s Health Sciences Authority, Moderna does not seem to be missing a beat. All things considered, should you be watching MRNA stock?

Next up, AbbVie (ABBV Stock Report) is a biopharmaceutical company that has been around since 2013 and is a spin-off of Abbott Laboratories (ABT Stock Report). The company’s products include drugs specifically designed to treat blood cancers, hepatitis C, and cystic fibrosis. AbbVie has seen its share prices rise by 17% in the past month.

From the company’s most recent quarter fiscal in late October, AbbVie reported a 52% year-over-year rise in revenue. Notably, almost 40% of its revenue for the quarter can be attributed to its arthritis treatment drug Humira. CEO Richard Gonzalez mentioned that the company is “very well positioned for the long-term.” He went on to say “Results from key growth products – including Skyrizi, Rinvoq, and Ubrelvy – continue to track ahead of our expectations, our aesthetics portfolio is demonstrating a strong V-shaped recovery, our hematologic-oncology franchise is delivering double-digit growth and we are advancing numerous attractive late-stage pipeline programs,” Overall, AbbVie appears to be firing on all cylinders moving into 2021. 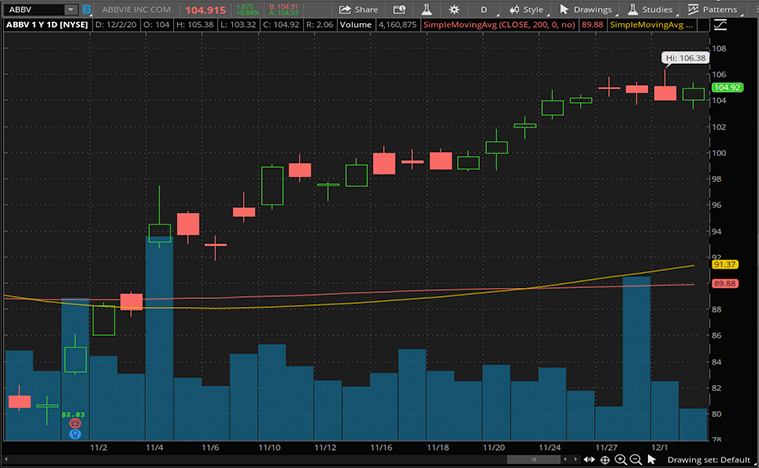 Last week, its Japan-based subsidiary AbbVie GK had some exciting news. Together with Japanese pharmaceutical company Eisai, it announced the approval for an additional indication of Humira in Japan. In particular, it is now verified as the world’s first drug used for treating pyoderma gangrenosum. This is great news for the company as its top-performing drug continues to make waves in the world of specialized medicine. Could this earn ABBV stock a spot on your watchlist?

Our last entry on this list is Alnylam (ALNY Stock Report). It is a biopharmaceutical company that focuses on the discovery, development, and commercialization of RNA interference therapeutics for genetically defined diseases. The Massachusetts-based company has three main products, namely Onpattro, Givlaari, and Oxlumo. As these are considered rare disease drugs, the company’s recent success could be perplexing to curious investors. To point out, its share prices are up by 39% since the stock market crash in March.

In the company’s recent quarter fiscal posted in November, it saw a 79% rise in revenue year-over-year. In detail, the Onpattro product line saw a 79% rise in global revenue with a 19% rise in patient demand across European markets. Moreover, the Givlaari product line reported a 52% increase in global revenue while Alnylam made progress with 10 Value-Based Agreements (VBA) in the U.S. This move essentially secures access to Alnylam’s rare disease drug for over 90% of people covered under the VBAs. The company’s use of VBAs puts both patients and insurers in a position to benefit from buying its products. For this reason, Alnylam stands out amongst its competitors. 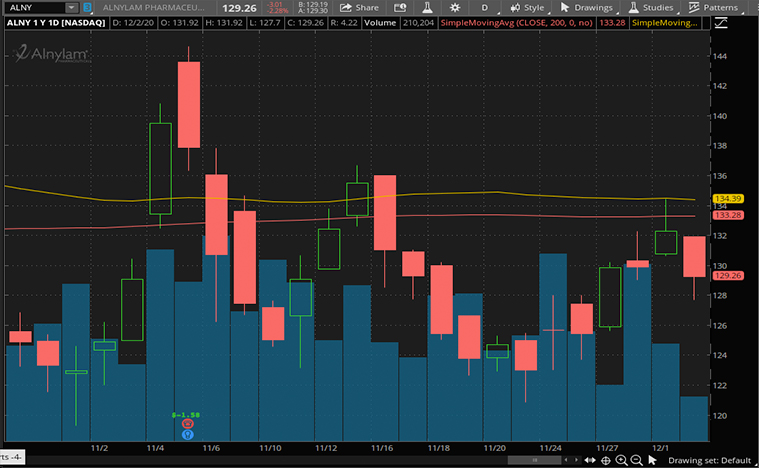 In recent news, the company announced a new framework for VBAs involving its Oxlumo product line. The U.S. Food and Drug Administration (FDA) approved the drug as a treatment for type 1 hyperoxaluria (PH1) in pediatric and adult patients. Alnylam is now in the midst of active discussions with leading insurers. It has reached an agreement in principle with Express Scripts, Harvard Pilgrim, and Highmark. This is a great move by the company as it expands the number of patients that can access Oxlumo. With such positive developments, are ALNY stocks a top biotech stock to buy?