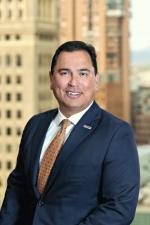 Aye returns to U.S. Bank from BOK Financial in Denver, where he established a track record of success. Earlier in his career he spent seven years at U.S. Bank in its Commercial Banking business where he developed a reputation as a strong leader and team builder. In addition to U.S. Bank, he has served as market president for Guaranty Bank and Trust Company, where he headed up the middle market team, and was a director with Stonehenge Growth Capital for more than seven years.

“We are delighted to welcome Andy back to the U.S. Bank fold. He has a demonstrated ability to build and manage successful teams and knows Colorado well. He will be a great asset as we continue to serve clients in this important market,” said Hassan Salem, head of Commercial Banking at U.S. Bank. Salem, who previously served as Colorado market president, added, “Andy truly understands the importance of doing the right thing for employees, clients, and the community. He will be a great champion for the U.S. Bank approach.”

Aye holds an undergraduate degree from the University of Notre Dame, where he was a finance major. He received his Master of Science degree in management and organization from the University of Colorado at Denver. A 25-year resident of Denver, Aye serves on the boards of the Metro Denver EDC Executive Committee, The Blue Bench, and ACE Scholarships.

U.S. Bank employs more than 2,700 people in Colorado. During the past three years, U.S. Bank made $8 million in foundation grants and corporate contributions to nonprofit partners throughout Colorado.

U.S. Bancorp, with more than 70,000 employees and $540 billion in assets as of September 30, 2020, is the parent company of U.S. Bank National Association, the fifth-largest commercial bank in the United States. The Minneapolis-based bank blends its relationship teams, branches and ATM network with mobile and online tools that allow customers to bank how, when and where they prefer. U.S. Bank is committed to serving its millions of retail, business, wealth management, payment, commercial and corporate, and investment services customers across the country and around the world as a trusted financial partner, a commitment recognized by the Ethisphere Institute naming the bank one of the 2020 World’s Most Ethical Companies. Visit U.S. Bank at usbank.com or follow on social media to stay up to date with company news.