What Are The Best Penny Stocks To Buy Now? 5 Moving Premarket

By: Penny Stocks to Buy, Picks, News and Information | PennyStocks.com - Feed
Are These Pre Market Penny Stocks On Your Watch List?

Are you looking for the best penny stocks to buy now? I’m sure you and hundreds of other traders are scouring through stock charts and looking at scanners to pick up on the next big momentum move in the stock market today. The extended hours before and after the market closes can be exciting times.

But it’s important to keep in mind that it only gives a small snapshot of how a stock trades. The idea that all penny stocks that gap up before the open or after the close will continue higher is risky. Simply put, extended hours trading has some restrictions. Through platforms like TDAmeritrade, Webull, and Robinhood, penny stocks are accessible with a few features added to a trading account.

In any case, premarket is a great time to start formulating your watch list. However, if you actually do decide to enter a trade, understand that you’re not trading with a full market. Once that opening bell rings, it can turn into a completely different scenario.

We’ve seen plenty of examples of this as well. While some penny stocks gap up and head even higher during the regular session, others drop like a rock as soon as the market opens. In light of this, if you’re trading penny stocks pre-market, understand that there’s a lot more market risk at play.

Some traders will keep a few rules of thumb. If they buy penny stocks premarket, they’ll also sell them premarket too. The idea here is that they’re trading during a certain, much shorter, session. The other school of thought is to record premarket gappers on your watch list and then see how the stock opens during the regular session. Sometimes waiting for a clear trend to form is better than fearing that you’ll miss out on a trade. This having been said, are any of these penny stocks on your list to buy or avoid right now?

Corvus Pharmaceuticals Inc. (CRVS Stock Report) has been a relatively quiet name among penny stocks. The company saw a massive surge back in July after announcing the initiation of a Phase 1 study of its immunotherapy approach for patients with COVID-19. CRVS stock experienced its highest, single-day share volume of the year. However, as you’ll see on the chart, shares came sliding back down during the weeks to follow.

This week, however, CRVS stock is back on the radar after another key development. Corvus announced updated data from its ongoing Phase 1 study investigating the potential for CPI-006 to provide an immunotherapy approach for patients with COVID-19.

According to Corvus’ CEO, Richard A. Miller, M.D., “The data supports continued evaluation of CPI-006 in this patient population, and potentially in outpatients with COVID-19 and in other infectious diseases. We are also exploring the potential use in combination with preventative vaccines under development by third parties to enhance and prolong immunity.”

What’s more is that the company also announced a strategic collaboration with Angel Pharmaceuticals to develop and commercialize its targeted medicines pipeline, in China. The deal gives Corvus a 49.7% stake and Angel’s pipeline will feature Corvus’ three clinical-stage candidates as well as its preclinical BTK inhibitor program. CRVS stock closed at $4.07 on Friday but has already begun trading much higher during premarket hours on Monday. Will that continue or will this be a repeat of what we saw back in July? 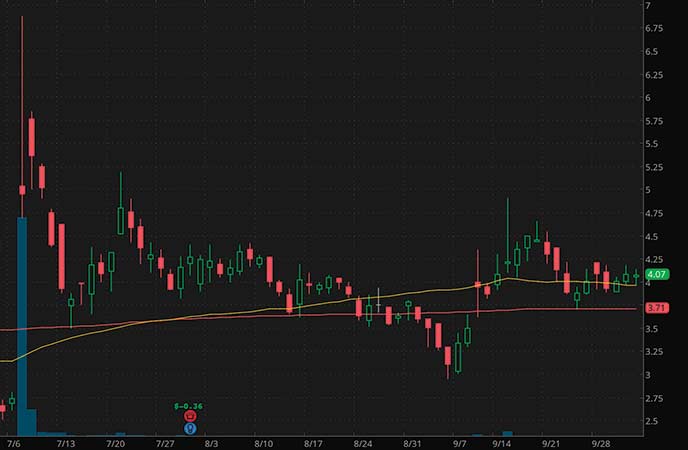 Biocept Inc. (BIOC Stock Report) has been no stranger to big breakouts this year. The penny stock spiked its way from $2.11 in March to highs of $13 in August on a reverse split adjusted price. But the month of August saw shares plummet. Even after reversing its price on a 1 for 10 basis, BIOC is back to being a penny stock.

[Read More] Looking For Penny Stocks To Buy? 4 To Watch This Week

Needless to say, it has caught a stronger bullish trend during premarket hours on Monday. BIOC stock had closed on Friday at $4.55. On October 5th, the price jumped as high as $5.85. The main catalyst was the company’s news on results from a prospective study. The study compared its Target Selector cerebrospinal fluid testing to conventional cytology in patients with non-small cell lung cancer and leptomeningeal metastasis.  The results were presented on Friday in a virtual poster at the International Association for the Study of Lung Cancer.

“These results indicate Target Selector™ may play an important role in providing valuable information to neuro-oncologists in making treatment decisions for patient with lung cancer metastases to  the brain,” said Biocept President and CEO Michael Nall. Will BIOC stock manage to uphold this bullish trend during the first full week of October? 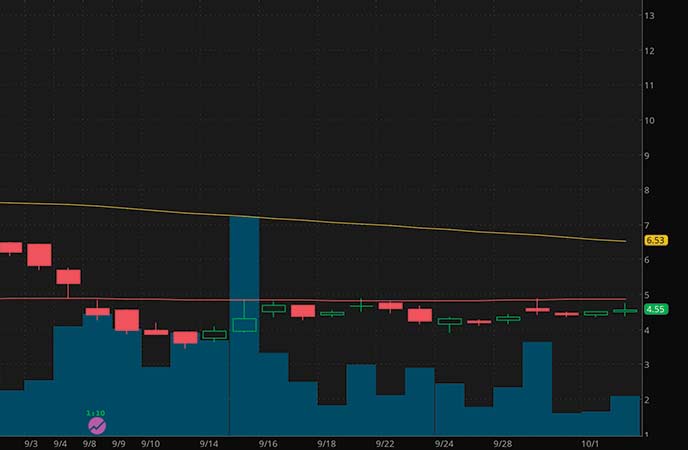 Kosmos Energy Ltd. (KOS Stock Report) is another one of the premarket gappers on Monday. KOS stock closed at $1.03 on October 2nd and during Monday’s premarket session it reached highs of $2.59. One of the sectors that have remained a focus of traders is the energy sector. But there’s more than just sector momentum fueling KOS stock this week.

Earlier in the morning, Kosmos announced that it strengthened its liquidity position. One of the things plaguing energy companies right now is the massive cash burn incurred as a result of coronavirus shutdowns. Kosmos announced that it closed a Gulf of Mexico facility with Beal Bank USA and Trafigura Trading. The company was able to restructure its previously announced Gulf of Mexico prepayment facility to a five-year, $200 million term loan facility.

“The closing and syndication of the Gulf of Mexico facility enhances the company’s strong liquidity position with access to low-cost, flexible financing. Along with free cash generated by our low-cost production assets and proceeds of the recent Shell transaction expected this quarter, the company’s balance sheet is expected to strengthen into 2021,” said Neal Shah, Chief Financial Officer. 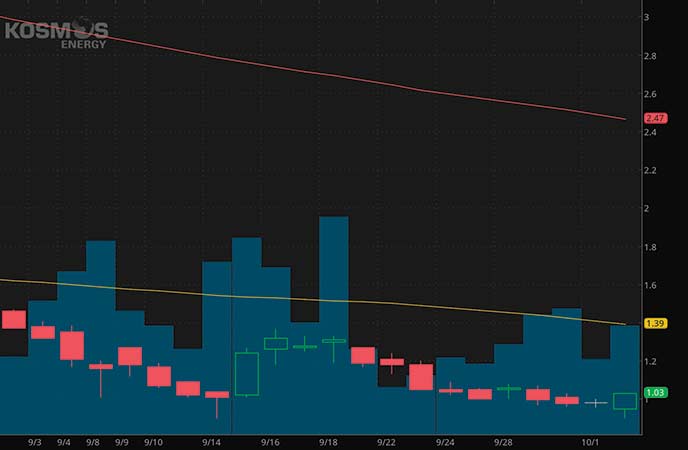 Biotech penny stocks are a big focus heading into the week. Things started off on a high note with big M&A news with Bristol-Myers Squibb buying MyoKardia at a premium to its Friday closing price. The sector momentum has trickled down to other stocks. Immunogen Inc. (IMGN Stock Report) isn’t just benefiting from sector momentum alone, however. The company has news this morning, which has acted as its own catalyst.

Immunogen announced that the FDA has granted Breakthrough Therapy designation for IMGN632 for the treatment of patients with relapsed or refractory blastic plasmacytoid dendritic cell neoplasm. Mark Enyedy, ImmunoGen’s President and Chief Executive Officer said, “We look forward to continuing to work with FDA to further define the development path for IMGN632 in BPDCN, in addition to pursuing our ongoing evaluation of IMGN632 in AML and other hematological malignancies.”

Breakthrough Therapy designation is used to expedite the development and review of therapies to treat a serious condition. These therapies have generated also preliminary clinical evidence that the drug may demonstrate “substantial improvement” over available therapy. The penny stock reached highs of $6.39 during premarket hours on Monday from a close of $3.87 on Friday. The biggest focus now is whether or not IMGN stock can maintain trading at these higher levels or if it’s set to slide back at the open. 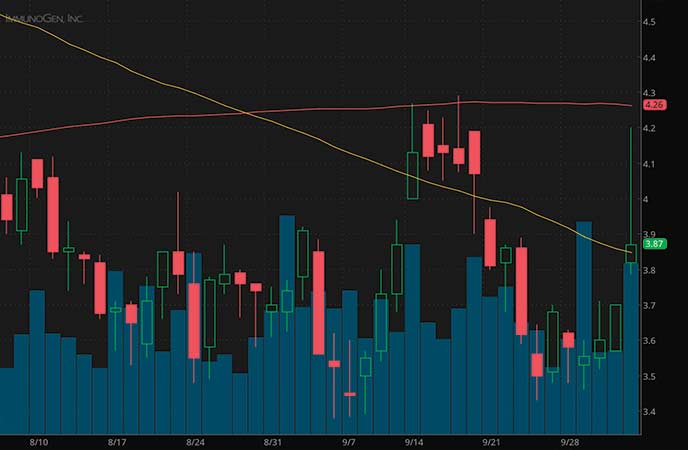 Westwater Resources (WWR Stock Report) was one of the penny stocks we’ve monitored for a few months now. Back in June, the penny stock was trading around $2. Fast-forward to this month and WWR stock is flying once again. Last week we discussed this in our article, “Should You Buy These Penny Stocks Today? 5 Up Big In October 2020.”

In fact, Westwater commented on this latest government initiative this week. The company applauded the Order saying that it addresses the threat to the U.S. supply chain from reliance on foreign countries. “Westwater’s business plan for the Coosa Graphite Project over the next two and a half years is to develop a U.S. domestic supply for natural graphite for use in all types of batteries in the United States,” said the company in its press release.

While its gap up wasn’t aggressive as the others, WWR stock still climbed more than 40 cents higher than where it closed on Friday. 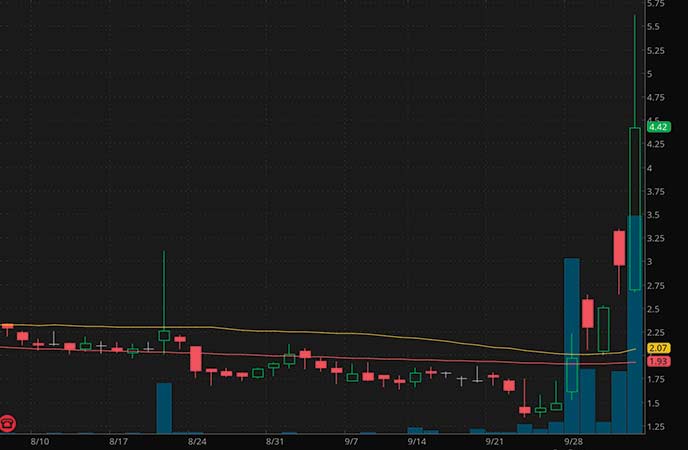