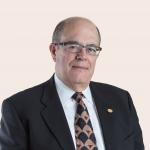 Barton joined Banner Bank as Chief Credit Officer in 2002, and retires with more than 48 years of experience in the banking industry.

"We are extremely grateful for the contributions Rick made during his time at Banner," said Mark J. Grescovich, President and Chief Executive Officer. “His credit intuition is exceptional and his expertise has helped guide us through significant periods of expansion and growth—from $2 billion in assets when he first joined the Bank to more than $14 billion today. Through his insightful leadership, we have a strong credit culture that will continue to serve the Bank for many years to come. The board joins me in thanking Rick for his valued service and contributions, and we wish him the best in his well-deserved retirement. Jill's appointment is a natural progression of our succession planning and facilitates a seamless transition as she has worked alongside Rick for more than 17 years. We are confident in her ability to lead our credit team into the future."

Rice has been a leader in the Credit Policy Division since joining the Bank in 2002, first as a Regional Credit Risk Manager, then as our Senior Credit Officer. She has led the commercial banking credit function since 2008 and earlier this year was promoted to Executive Vice President, expanding her role to Chair of the bank’s Credit Policy Committee and a member of the Disclosure Committee. Rice has more than 30 years of credit-related experience, including time as a Senior Bank Examiner with the FDIC. She earned her bachelor’s degree from Western Washington University, is a graduate of the Pacific Coast Banking School, and has held the RMA Credit Risk Certification since 2009.

A Washington-chartered commercial bank, Banner conducts business in Washington, Oregon, California and Idaho. The bank offers a wide variety of commercial banking services and financial products to individuals and small and medium-sized businesses and their employees. Banner Bank is a wholly-owned subsidiary of Banner Corporation, a $14.4 billion bank holding company headquartered in Walla Walla, Washington. Visit Banner Bank at www.bannerbank.com.