Brown’s Manassas Subaru, and owner William E. Schuiling are proud to team up with NBC4 and Telemundo44 for the Clear the Shelters Event again this year on August 10th. 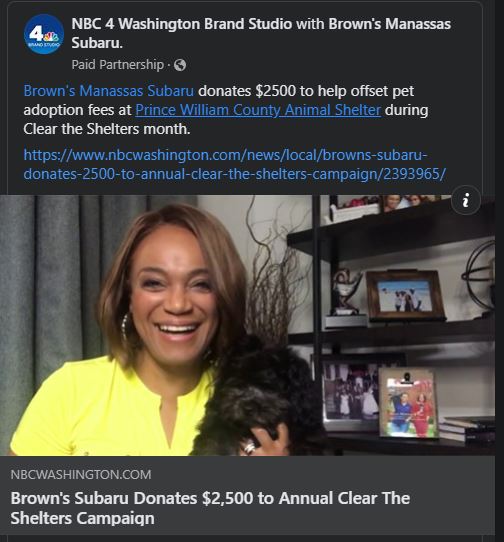 Brown’s Manassas Subaru, and owner William E. Schuiling are proud to team up with NBC4 and Telemundo44 for the Clear the Shelters Event again this year on August 10th.  To help individuals and communities continue to practice safe social distancing measures, the initiative was moved to a virtual event. General Manager, Patrick Hall of Brown’s Manassas Subaru met with the Prince William County Animal Shelter Representatives to donate $2,500. This donation will help with the Shelter’s adoption fees for families and also helps take care of the animals still in the shelter.

Brown’s Subaru has participated in this event for 4 years. This was their second time partnering with their local shelter for the Clear the Shelters event. Subaru has partnered with Prince William County Animal Shelter to sponsor adoptions in other capacities like featuring a dog of the week on their page and covering the cost of the adoption.

In total, Brown’s Subaru has donated over $10,000 the Prince William County Animal Shelter. Subaru looks forward to a continuing partnership with their local animal shelter and giving the gift of a forever home to their animals!

Browns Car Stores is proud to serve Northern Virginia, Maryland and Washington, DC, motorists since 1972. We are the largest privately owned automotive company in the Mid-Atlantic region, with a number of dealerships throughout Virginia, including Richmond and Charlottesville. We also have several Maryland locations, including Glen Burnie and Baltimore.