3 Penny Stocks Under $1 To Watch Before Q4

By: Penny Stocks to Buy, Picks, News and Information | PennyStocks.com - Feed
Are These Penny Stocks Under $1.50 On Your Radar

Now, I’m not trying to scare you away. But if you’re new to this world of low-priced stocks, these are things to be aware of. It’s not as easy as looking for stocks under 10 cents and thinking you’re going to score big because the price is low. You also have to think about the other side of the trade as well. At the end of the day, treating the stock market like a lottery ticket isn’t the best way to go about trading.

Having a clear strategy in place can help you become consistently profitable no matter what the price is of the penny stocks you’re looking at. Another thing to note is that low prices also equate to quick percentage changes and, thus, the potential to hold certain stocks for a shorter period. With this in mind, are any of these on your watch list this month?

Penny Stocks Under $1 To Watch In September: Shiloh Industries

Another one of the companies we talked about this week was Shiloh Industries (SHLO Stock Report). The end of August was rough for the company as Shiloh reported that it filed for Chapter 11 with a deal to be acquired. Shiloh, also said that it intends to pay its suppliers in full under normal terms for goods and services provided on or after August 30, 2020. This sent shares of SHLO stock to lows of $0.26. Considering that it was trading above $1 for most of August, it was a meaningful drop.

However, over the last 3 sessions, SHLO’s volume began to rebound. The initial spark to this momentum started after Shiloh announced that it received approvals from the U.S. Bankruptcy Court for the District of Delaware for all of its “First Day” motions related to the voluntary Chapter 11 petitions.

“We are pleased to have received the Court authorization we need to continue our operations during the sale process,” said Cloyd J. Abruzzo, Interim chief executive officer of Shiloh. “As we move through this process, we look forward to continuing to serve our customers and meet their needs as the automotive industry recovers from the COVID-19 pandemic. I would also like to thank our employees for their continued dedication to our company.”

Over the last few days, SHLO stock has manage to climb back from $0.26 to highs on Friday of over $0.90. Will this initial catalyst trigger a lasting trend for the month of September? 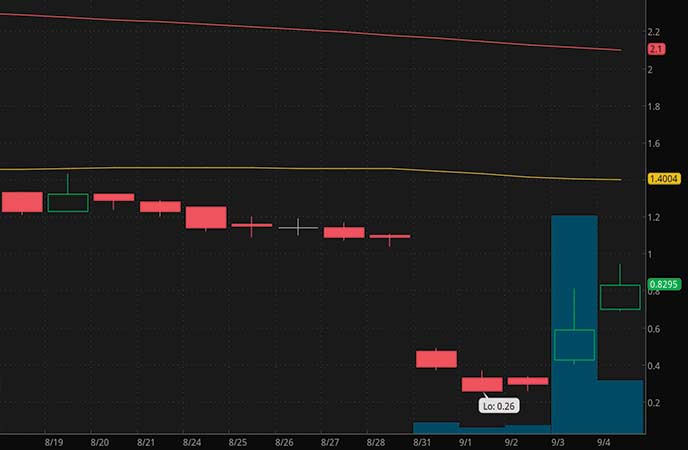 Penny Stocks Under $1 To Watch In September: Adamis Pharmaceuticals Corp.

Adamis Pharmaceuticals Corp. (ADMP Stock Report) has been one of the penny stocks to watch this month. I know we discussed it on Thursday after ADMP stock rallied after news headlines. While the news itself didn’t appear bullish based on the headline. However, if you start reading through the meat of the release, it sheds some light on the company’s plan right now.

This had to do with the company’s adjournment of its annual meeting. Something of particular note was with regard to a proposal for a reverse split. This is something investors appeared nervous about over the last month as well. Needless to say, while the proposal was approved by a majority of votes cast at its annual meeting, it wasn’t approved by the majority of the outstanding shares entitled to vote at the meeting.

So now what? Without approval for the reverse split, will the company end up going out of compliance again with NASDAQ? Adamis just regained its status with the exchange after achieving a minimum bid price of $1 in August. Obviously, that hasn’t been the case recently, which is something to keep in mind after this week’s news. Needless to say, Dr. Dennis J. Carlo, President and Chief Executive Officer of Adamis Pharmaceuticals, seemed upbeat about this development.

He said, “We are pleased with the outcome of the annual meeting and most appreciative of the efforts of our shareholders to participate in the process.  We now eagerly look ahead to what we expect to be an approval and a commercial launch of ZIMHI [the company’s opioid overdose treatment] before year end.” 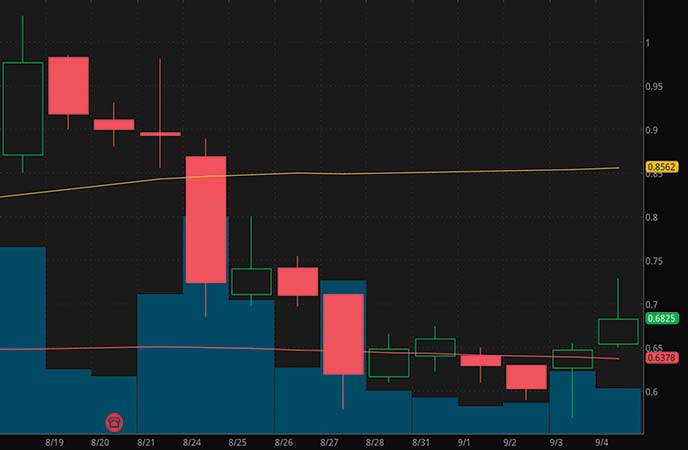 Penny Stocks Under $1 To Watch In September: Basanite Inc.

This is the first week we’ve actually taken a closer look at a few higher volume OTC penny stocks. Basanite Inc. (BASA Stock Report) has started to make headway during the month of September. Friday morning saw BASA stock reach a new 52-week high. There are risks involved in all penny stocks. However, the OTC traditionally has a bit more risk in my opinion. That’s due to reporting requirements for those companies as well as the prices at which they raise funds. It can be at extreme discounts in some cases.

Basanite is no stranger to big moves. If you pull up a chart and take it out to a two-year timeframe, you’ll see a huge run last year from early-April to mid-May. BASA stock rallied from around $0.13 to highs of $1.13. It traded above $0.60 for a few months thereafter but eventually came back to levels its previous $0.13 level. BASA stock is highly volatile and momentum has begun to pick up again this month.

The company produces basalt fiber reinforced polymer – BFRP – products that are used as replacements for steel products, which reinforce concrete, such as rebar. The company’s product includes BasaFlex; BasaMix and BasaMesh. With the surge in construction this year even amid the pandemic, building material stocks have received some attention. In July the company signed a deal with MEP® Consulting Engineers, Inc.

MEP will be the exclusive provider of BFRP Reinforcing Bar and other BFRP products to the Florida-based construction community. Other than that, there haven’t been many new developments to note. One thing to keep in mind is that the company has 1 billion shares authorized right now. There’s also no shortage of notes payable on the books. If this is on your watch list right now, keep this in mind as, like many OTC penny stocks, dilution risk can play a big role. 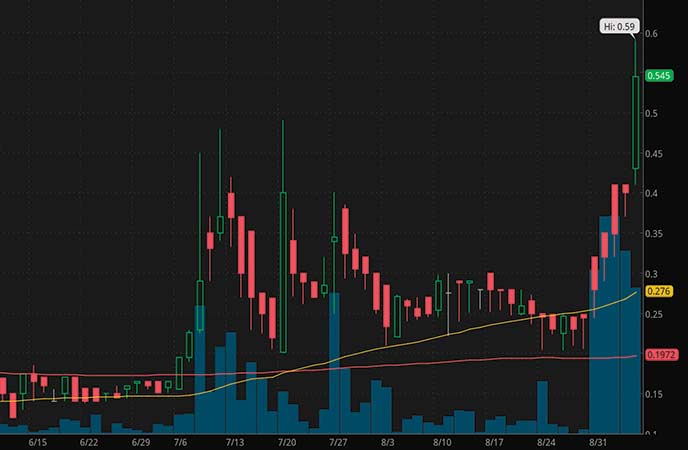