Top Penny Stocks To Buy For Under $2 Right Now

When you look at the stock market today and analyze some of the top penny stocks, do you find certain things in common? Honestly, if you can’t answer that question, you’re not alone. Penny stocks tend to be their own “thing”. Where major market headlines may shift momentum for stocks like Facebook or Twitter, stocks under $5 react differently.

But herein lies the commonality. When you’re looking for penny stocks to buy, the first step is setting your screener to find stocks under $5. While there are penny stocks that trade below $1, I like to use as much of the price range as possible to find top penny stocks to watch.

Case in point is this week. Had you been looking for penny stocks under $2, for instance, you might have missed out on Urban One (UONE Stock Report). This was the “belle of the ball” in a week already full of big breakouts. Shares opened for trading at $2.18 on Monday and soared to highs of $40 by Tuesday afternoon. Needless to say, there’s nothing wrong with narrowing down your search for the best penny stocks. But in this case, not using the entire range up to $5 may result in you missing out on things like UONE.

In any case, today, we’re going to take a look at a few stocks that can be purchased for under $2 right now. Just because they may appear to be “cheap stocks” will they be the best penny stocks to buy?

Penny Stocks To Buy For Under $2: Geron Corporation

Shares of Geron Corporation (GERN Stock Report) continued to trend higher on June 17. The penny stock has held a 3-day uptrend moving from $1.57 to highs of $1.83 this week. In general GERN stock has been one to watch for most of this quarter. Since April 1, shares have climbed from $1.16 to as high as $2.40.

The initial move came as Geron was set to present at the European Hematology Association Annual Congress. In anticipation of the event, GERN stock jumped from around $1.30 on May 14th to highs of $2.40 by the 18th. What’s more is that Geron announced plans for Phase 3 clinical trials for its imetelstat in patients with myelofibrosis. The company was also able to raise more than $100 million just before reporting better than expected earnings at the end of May.

Thanks to these milestones, GERN stock received upgraded price targets from a few analysts. B. Riley FBR boosted its target to $4. Canto Fitzgerald lifted its target to $4 as well. Trading volume has remained consistent with the penny stock and GERN shares have been in a steady but shallow uptrend for a few weeks now. Something to note if GERN stock is on your list, the stock chart is showing a potential “Golden Cross” formation.

This is a bullish formation where the 50-Day moving average crosses above the 200 Day moving average. The confirmation is usually seen from volume surges. So as things progress, that could be a key factor to take note of. 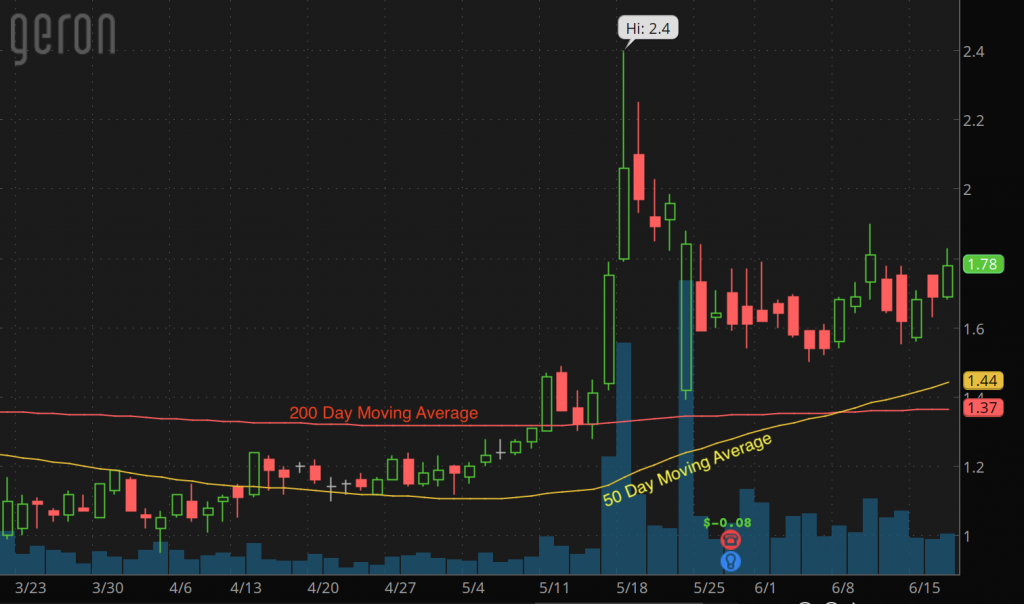 Penny Stocks To Buy For Under $2: Ideanomics Inc.

If you’ve read PennyStocks.com articles this quarter, you’re well-aware of Ideanomics Inc. (IDEX Stock Report). During the first week of June, shares started popping off as the company announced a joint venture to create an investment company focused on infrastructure projects in China. We’re talking things like 5G, highways, internet, etc. However, beyond that, the company has been making bigger headlines recently, related to electric vehicles; which makes sense. Ideanomics looks to facilitate the adoption of electric vehicles through its EV division, Mobile Energy Global.

Not only did Mobile Energy start rolling out EV taxis in the Guanxi Province this month, Ideanomics reported results from May sales at ME’s Center. In the month of May the company sold over 2,100 vehicles. Bviously the surge of interest in electric vehicles has grown this month considering the Nikola IPO. IDEX stock has managed to climb by more than 360% since June 5.

What’s behind the move for IDEX stock on the 17th? After announcing a 300 unit order from Didi City CPon Tuesday worth some $4.2 million, the company had even more good news on Wednesday. Ideanomics reported that it had a 400 unit EV order from Jiudao Group valued at $5.1 million. On top of that, delivery is expected by the end of this month. In light of these latest developments, IDEX stock has climbed to fresh 2020 highs of $187 on Wednesday. Trading momentum has also picked up. Will IDEX be on your list of penny stocks to buy before July? 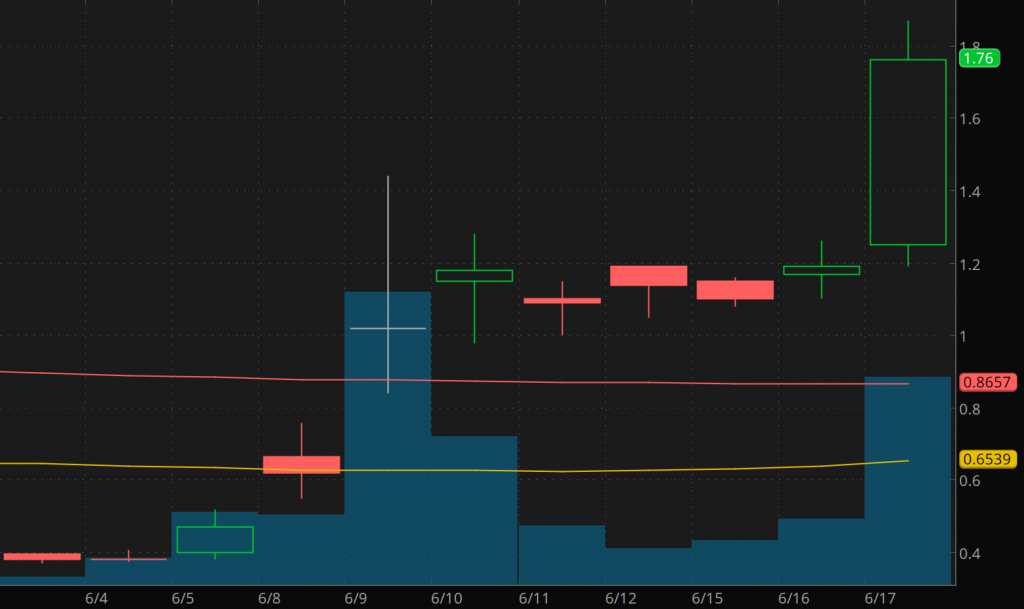 Penny Stocks To Buy For Under $2: Sunesis Pharmaceuticals Inc.

Sunesis Pharmaceuticals Inc. (SNSS Stock Report) caught a strong boost of momentum on Wednesday. Shares have steadily climbed since the first week of June. However, on June 17th SNSS stock saw one of its biggest 1-day moves in price this quarter. The penny stock broke out from around $0.51 to highs of $0.699. If SNSS seems familiar that’s because we were discussing it late last year in December. At the time, shares traded around $0.39 and by late February saw highs of $1.13.

But after a bad earnings report, shares dropped in March. That would ultimately set SNSS up to enter the bullish trend it has been on ever since. “As we navigate our business challenges associated with the pandemic, we continue to make progress on both our vecabrutinib and SNS-510 programs. We still expect initial response assessments for the 500 mg cohort in our Phase 1b/2 study of vecabrutinib this quarter, as well as follow up assessments from patients from lower dose cohorts who remain on treatment. For our first-in-class PDK1 inhibitor, SNS-510, we remain on track to file an IND by year end,” said Dayton Misfeldt, Interim Chief Executive Officer of Sunesis. 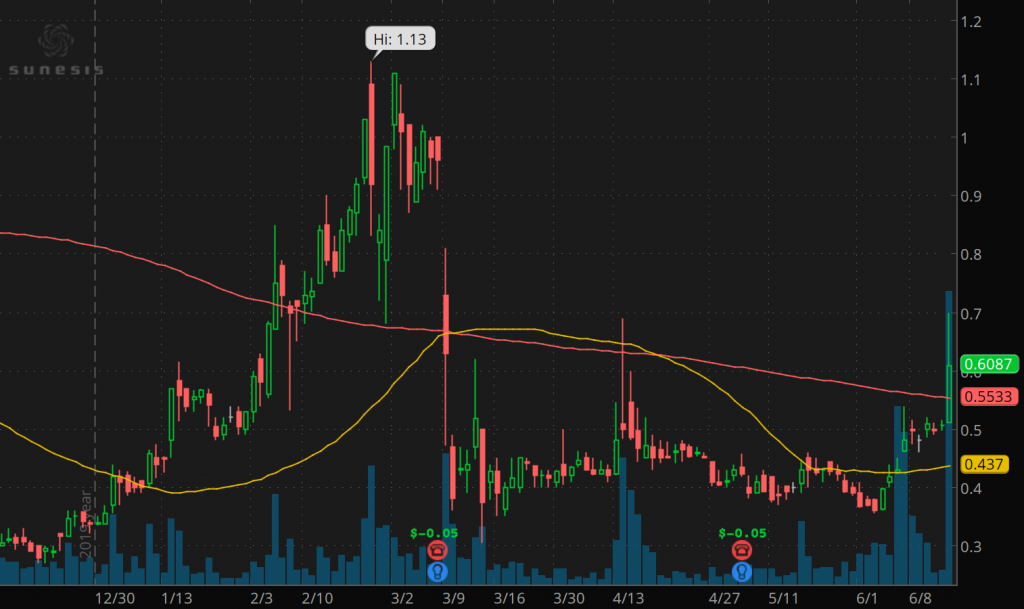