The 10 U.S. Companies with the Most Minimum Wage Workers

As pressure to raise the federal minimum wage increases, the U.S. companies with the most minimum wage workers - primarily retailers, restaurant chains, grocery chains, and hotel chains - will need to plan for possible changes. 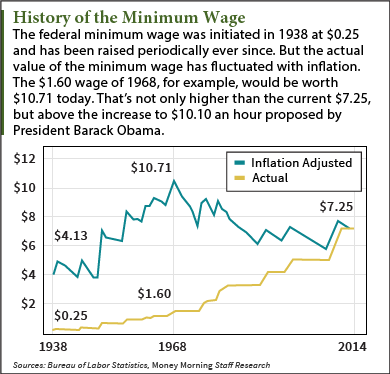 Some companies are acting pre-emptively. Clothing retailer The Gap Inc. (NYSE: GPS) announced today (Thursday) that it plans to increase its wages to $10 an hour by next year, a change that will affect 65,000 workers.

The current federal minimum wage is $7.25 an hour.

The Gap, which operates such chains as Banana Republic and Old Navy, said it will raise wages to $9 this year and to $10 next year.

The latter figure is suspiciously close to the $10.10 an hour that U.S. President Barack Obama has made his target for the minimum wage. Should Congress act, The Gap will already have the change built in to its business plan.

And then there's Costco Wholesale Corp. (Nasdaq: COST), which favors a higher minimum wage because it will increase costs for rivals. Costco pays its employees a comparatively generous $11.50 an hour to start; average wages are nearly $21.

Other companies that would be affected by a minimum wage increase are mulling their options.

Wal-Mart Stores Inc. (NYSE: WMT) - the nation's largest private employer - and Dollar General Corp. (NYSE: DG) have said they're neutral on the issue but are looking into the possible benefits of a minimum wage raise.

Large industry groups like the National Retail Federation and the U.S. Chamber of Commerce remain opposed to a minimum wage increase, arguing it will cost jobs.

The minimum wage debate over jobs versus improving the lives of millions of the working poor will rage through most of this year, as the Democrats have fixed on it as a central campaign issue for the mid-term elections.

That means the companies with the most minimum wage workers all need to come up with a strategy to deal with whatever may happen. Even if Congress fails to raise the minimum wage this year, having a spotlight on the issue will create image problems no public company wants.

The 10 U.S. Companies with the Most Minimum Wage Workers

Are these big corporations, which can rake in billions in profits, taking advantage of their employees by paying low wages? Or are these workers getting paid what they deserve? Tell us what you think on Twitter @moneymorning or Facebook.

The minimum wage debate is just getting started, a lot is going to happen before we get to November - and most of it will be very unpleasant for the Republicans. Here's how this scenario will play out...

The post The 10 U.S. Companies with the Most Minimum Wage Workers appeared first on Money Morning - Only the News You Can Profit From.